Well we survived the first two weeks with the helmet. Both Hudson and myself, don't seem to be bothered by the helmet. The hardest part about the helmet was probably putting it on and taking it off as our little guy is an active one and won't sit still! 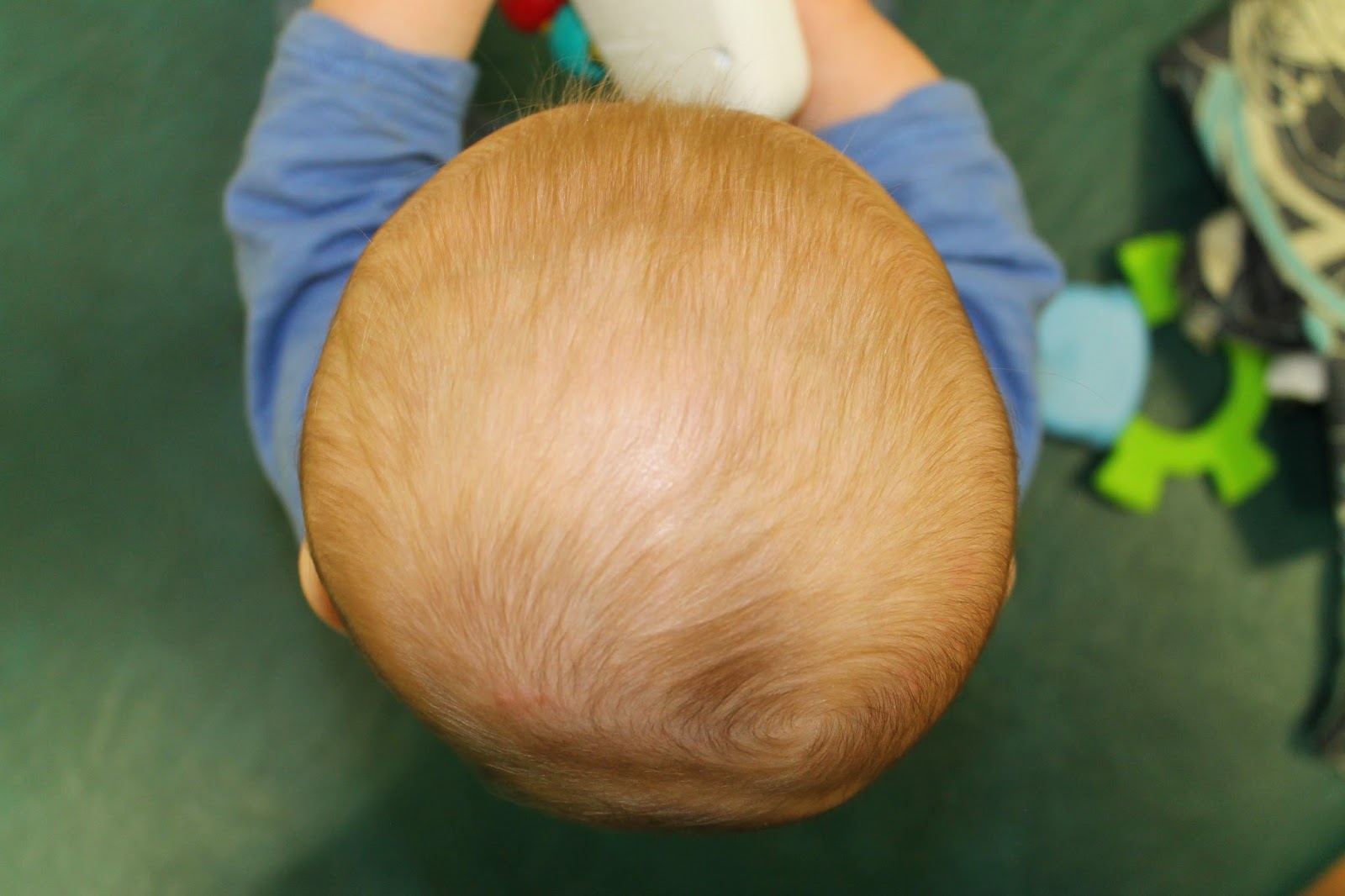 
This schedule worked really well and we didn't find any issues with Hudson getting used to the helmet. We didn't have any red spots from the helmet not fitting correctly. I did find the helmet was a bit big and would move side to side and his left ear was covered a bit.

We had our two week fitting appointment with our Othotist. Hudson had his head measured and had the following changes:

The numbers above tell me that Hudson's head is growing in the proper direction! It is to grow in length not width. The cephalic ratio figure is the breath divided by the length being the difference between the two. We are looking for the number to be less than 91% , we are on our way. Hudson's head started out as being quite round, both the breath and length were similar numbers. We want the head to be longer than it is wide.

We are provided ratio figures for the anterior and posterior of the head. We are looking for the posterior of Hudson's head to be great than 95. We went from 88.2 to 89 in two weeks.

The next set of numbers we are given relate to the features of the face, both the forehead and the ears. With plagiocephaly there is often some shifting of the ears and a portion of the forehead can stand forward more than the other side. We would like the figures to equal one another, showing that the forhead is the same on the left and right and same goes for the ears. Hudson does not have too much of an issue here so I won't analyze those figures.

The cranial vault asymmetry index (CVAI) figure looks at the diagonals of the head, from the front right to the rear left of the head and vice versa. This shows the degree of the plagiocephaly as one side of the head stands out more than the other head. Hudson's Q3 volume is greater than the Q4 volume due to the plagiocephaly. The flat spot is on the Q4 side which is why there is the least amount of volume in this portion of his head.

We would like the CVAI figure to be less than 3.5. In two weeks Hudson went from 6.3 to 5.4. Hudson has minimal asymmetry but started at 10.1.  His head decreased greatly in the period between first getting scanned to fitting the helmet, being 5 weeks time.

Ok, so that's the technical stuff....here is the emotional side of the helmet journey...

We are really happy with the results so far. We don't find the helmet to be an issue as Hudson doesn't seem to mind it. We haven't had any issues with strangers making any odd comments as some other parents had but from the beginning I decided I wasn't going to worry about any possible comments. I'm a proud Mama and know we are doing the right thing for Hudson. It will be such a short overall period of his life. I've spoken to many people in these first two weeks and I've heard from parents who went through the helmet process and those that wish they had.

It's been such a positive experience! Hudson is such a happy fella so we get so many comments about how cute he looks in his helmet. Others ask why he has it and I have no problem explaining why. My view is the more people I can educate, the easier it will be for other struggling parents. I believe understanding comes with knowledge and if I can break down the barriers between people who wonder why my baby is wearing a helmet and myself, I feel it can only be positive and help other parents who might be going through something more serious. Most parents don't mind talking about what is going on if it is done in the proper respectful and educational manner.

This update was done at nearly 4 weeks into our helmet journey and all continues to go well! We are so used to Hudson wearing his helmet when he has "helmet free" time, we aren't used to his little head! I've even had people ask what baby store I bought his helmet at so they could get one to protect their baby!

Next update will come after our 6 week appointment. Grow Hudson grow and your helmet will be gone faster!

I'm Kristina Preece, welcome to my blog. I share my thoughts as a Mom of 4 children, 3 boys with twins and one sweet heavenly girl who grew her wings in 2014. I am grieving but living and want to share my experiences with others.